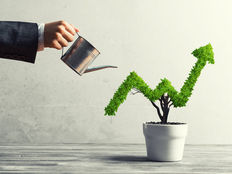 Go After the Dip in This Growth Sector ETF

Even high-quality growth stocks such as Facebook (FB) and Alphabet (GOOG) are being discounted due to the coronavirus pandemic’s effect on equity markets. The bright spot there is opportunity is arriving with ETFs including the Communication Services Select Sector SPDR Fund (XLC).

One reason to embrace XLC in the current climate is its exposure to companies levered to the stay at home theme. For example, the fund has one of the largest weights to Netflix (NFLX), a stock that’s benefiting from consumers’ increasing demands for at-home entertainment.

Fortunately, those high-yielding stocks, which are under some dividend scrutiny by some market observers, don’t dominate XLC. Rather, cash-rich Facebook and Alphabet do.

One reason to consider XLC “is cash, something there’s a newfound premium on the current climate. Alphabet and Facebook have cash. Lots of it,” reports InvestorPlace.

In fact, Alphabet and Facebook, which combine for over 40% of XLC’s roster, have two of the largest cash hoards among all S&P 500 companies.

“At the end of 2019, the Alphabet had $119.67 billion in cash on hand, while Facebook had $54.85 billion. In volatile times, cash can be a buffer and it’s a quality trait at a time when investors are eagerly embracing quality stocks,” according to InvestorPlace. “For those considering XLC, it’s clear the ETF is home to some cash-rich companies and none of its marquee holdings will be asking Uncle Sam for a bailout anytime soon.”