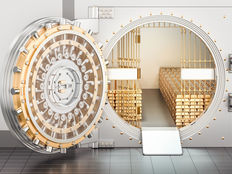 Despite news of a trade deal swirling with the U.S., China is shoring up its reserves of gold amid a slowing economy. This could help exchange-traded funds (ETFs) like the SPDR Gold Shares (GLD A-) and SPDR Gold MiniShares (GLDM).

Per a Bloomberg report, the “People’s Bank of China raised reserves to 60.62 million ounces in March from 60.26 million a month earlier, according to data on its website on Sunday.” Furthermore, the world’s second largest economy has been adding more gold to its reserves for a fourth straight month.

As of 11:30 a.m. ET, GLD was 0.48 percent higher and GLDM rose 0.61 percent. Gold has long been used as a safe haven asset, particularly when the value of the dollar declines. Furthermore, it provides a hedge for inflation since its price typically rises in conjunction with consumer prices.

During the Great Depression of the 1930s, gold was also a hedge against deflation. While the prices of assets were dropping during this time, the purchasing power of gold rose to prominence.

Fast forward to the financial crisis in 2008, the price of gold increased sharply while faith in U.S. equities was languishing. In essence, gold has proven to withstand times of geopolitical and economic uncertainty.

With the latest Fedspeak sounding more dovish as it now projects two interest rate hikes in 2019 as opposed to three or more, this could be the trigger for gold to return to come back into the forefront, particularly as a safe-haven option in the wake of more volatility. While bonds are typically the default play when U.S. equities go awry, gold is also a prime option for diversification as a safe alternative.

Is Upside Ahead for Gold?

In move that was widely anticipated by most market experts, the Fed elected to keep rates unchanged last month, holding its policy rate in a range between 2.25 percent and 2.5 percent. In addition, the central bank alluded to no more rate hikes for the rest of 2019 after initially forecasting two.

The capital markets initially expected rates to remain steady after the central bank spoke in more dovish tones following the fourth and final rate hike for 2018 last December. Of course, less hikes and a rate cut would translate to dollar weakness–an open path for strength in gold.

“Recent comments from Fed officials, as well as FOMC members’ guidance on policy rates, all suggest that U.S. policy rates will remain unchanged for the foreseeable future. Fed fund rates futures are similarly pricing in no rate increases at least for 2019 … This in itself should be positive for gold, as it should encourage investor interest in safe-haven assets,” Metals Focus noted.