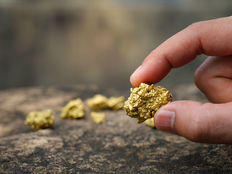 With gold ranking as one of this year’s best-performing commodities, gold miners exchange traded funds are delivering stellar performances. For example, the VanEck Gold Miners ETF (GDX B+), the largest gold miners ETF by assets, entered Friday with a year-to-date gain of almost 34%.

GDX is comprised of global gold miners, with a notable tilt toward Canadian and U.S. mining companies. Stock fundamentals like cost deflation across the mining industry, share valuations below long-term average and rising M&A are all supportive of the miners space as well. Some market observers believe gold miners can continue moving higher in the second half of 2019.

Gold ETFs are pushing to upside amid increased expectations of a U.S. rate cut, even as some investors locked in profits from bullion’s recent rally. Gold is believed by many investors to be inversely correlated with interest rates. Rising interest rates make bonds and other fixed-income investments more attractive, so money will flow into higher-yielding investments, such as bonds and money market funds, and out of gold, which offers no yield at all during times of higher interest rates, and back into gold ETFs.

“Gold has benefited from a number of factors but popped in electronic trading late Thursday after New York Fed President John Williams made comments that the market implied as raising the likelihood that the Federal Reserve may take more aggressive action at the end of this month to stave off a tariff-induced slowdown in the economy,” according to MarketWatch.

President Trump has long expressed concerns over the strength of the dollar and the pressure on U.S. trade. A Fed trade-weighted measure of the greenback is close to the strongest since 2002, reflecting a drag on American exports. The Fed, though, is widely expected to lower rates later this month, which should help weaken the U.S. dollar.