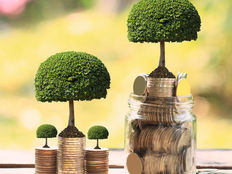 As has been widely documented, the climate change and decarbonization efforts are expensive endeavors for companies and governments. Over multi-decade timeframes, the amount of spending required to meet various net zero objectives is likely to reach deeply into the tens of trillions of dollars. Those are big-time figures and those forecasts certainly imply debt issuance must be part of the equation. All that massive spending could augur well for the VanEck Green Bond ETF (GRNB B), which is the original and still dominant name among exchange traded funds focused on green bonds.

Green bonds are issued specifically to finance environmentally friendly or climate-driven projects, such as solar and wind farms. Adding to the long-term allure of GRNB is the point that both companies and governments issue green debt, meaning the fund provides investors with a unique issuer mix rarely found in standard bond funds. China is among the countries that are the most committed to large-scale green bond issuance.

“In less than a decade, China has built one of the world’s biggest green bond markets, with more potential than any other to alter the course of climate change,” reported Bloomberg. “The Communist Party has made the green bond market central to reducing emissions in the world’s biggest polluter, but an analysis by Bloomberg reveals important gaps in disclosure and transparency.”

GRNB follows the S&P Green Bond U.S. Dollar Select Index and allocates 10.31% of its roster to Chinese green bonds, making the country the ETF’s second-largest geographic exposure behind the U.S. China currently has $300 billion in green debt outstanding, a figure some experts believe will grow over time given the country’s substantial green financing needs.

There’s another benefit to GRNB: Transparency. Green bonds are still relatively new concepts in the broader fixed income market and more issuer transparency is needed for global investors  to get a better handle on exactly what constitutes green bonds. China paints the picture as to why transparency is essential in this corner of the bond market.

“Eight of the ten biggest green bonds issued by Chinese companies don’t provide specific details about their target projects. Some of the bond proceeds are earmarked for debts incurred years earlier. Others are designated for activities with plausible yet hard-to-pinpoint environmental benefits,” according to Bloomberg.

It behooves China to up its green bond disclosure game because, by some estimates, the country could issue as much as $18 trillion in green debt over the next several decades.