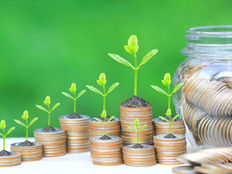 In what could be a long-term positive for the VanEck Vectors Green Bond ETF (GRNB B), issuance of green bonds is an increasingly global affair.

GRNB, which follows the S&P Green Bond U.S. Dollar Select Index, is the dominant name among green bond exchange traded funds. While this is a nascent corner of the vast fixed income market, it’s a fast-growing one, and that growth is being propelled by increasingly global diversification as well as asset allocators’ demand for bond products with environmental, social, and governance (ESG) attributes.

GRNB holds 324 bonds, which is a small amount relative to a standard aggregate bond fund, but a decent-sized roster considering the youth of green bonds as an investable asset class. Despite that youth, more countries are entering the arena.

“European green bond issuance fell to $46.5 billion in the second quarter from $74.19 billion in the same period last year, according to the Climate Bonds Initiative, a U.K.-based green debt tracker. While Europe remained the highest-contributing region to green debt globally, its share of issuance dropped to 41.7% in the quarter from 54.8% a year ago,” according to S&P Global Market Intelligence.

Europe’s long-running dominance in terms of green bond issuance isn’t surprising when considering the continent’s commitment to clean energy. Those initiatives require capital, making green bonds an effective avenue for raising that cash. GRNB is reflective of Europe’s perch in the green bond space, as roughly 10 European nations are represented in the VanEck fund.

Fortunately for the longer-ranging green bond thesis and that of GRNB, other regions are tapping into the benefits of green debt.

“Meanwhile, issuance of internationally aligned green bonds in Asia-Pacific reached its highest level to date, as new regulation and growing demand from global investors drove record supply from China. Green bond issuance in the region totaled $39.15 billion in the second quarter, up from $29.44 billion in the same period last year. It helped Asia-Pacific grow its share of global green bond issuance to 35.1% in the quarter from 21.7% a year earlier,” noted S&P Global.

That’s relevant to GRNB investors because China, India, Japan, Singapore, and Indonesia combine for about 20% of the ETF’s geographic exposure. China is leading Asia-Pacific issuance of green bonds. However, European remains relevant to GRNB.

The European Union “progresses on plans to sell €250 billion worth of green bonds through 2026. EU green bond issuance came in at €11 billion, or $12.36 billion, in the second quarter, although this is classified as a supranational by the Climate Bonds Initiative, a separate category to Europe,” concluded S&P.