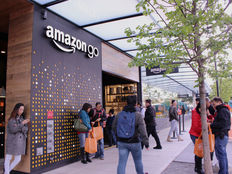 Head Out Shopping With a Well-Positioned Retail ETF

March brought the largest decline in retail sales in nearly three decades as the coronavirus altered consumer confidence and spending, but some ETFs, including the VanEck Vectors Retail (RTH B+), may be well-positioned for a new look retail industry.

RTH turns nine years old later this year and follows the MVIS US Listed Retail 25 Index, “which is intended to track the overall performance of companies involved in retail distribution, wholesalers, on-line, direct mail and TV retailers, multi-line retailers, specialty retailers, and food and other staples retailers,” according to VanEck.

While it’s often known as an ETF with one of the largest weights to Amazon.com (AMZN) – 22.68% to be precise – RTH’s robust exposure to the staples retailers, such as Dow component Walmart (WMT) and Costco (COST), is a plus in the COVID-19 environment.

“Some large retailers that are focused on e-commerce, groceries or other essential products have been experiencing unprecedented sales volumes as to the rush to stock up on household essentials continues,” said VanEck in a recent note. “In the two weeks ending March 22, 2020, U.S. grocery sales are up 83% from the same period last year.”

Staples are extending a run of being sturdy amid the COVID-19 outbreak as the public seeks refuge within their homes, amid a haven of Clorox bleach, Coca-cola (COKE), and toilet paper. These are goods that will continue to be necessary regardless of the landscape, and some states are even mandating that stores remain open to sell them.

“At a time when many other industries are seeing large-scale layoffs, these retailers are on a hiring spree to help address the rise in demand. Amazon has hired 80,000 workers over the course of a few weeks as part of its plan to add 100,000 to its workforce, while Walmart plans to expand its employee base by 10%,” according to VanEck.

RTH “offers exposure to companies involved in retail, including distribution, wholesalers, online retailers and retailers of food and other staples. Amazon, Costco, Walmart, and CVS are among its largest holdings. Year-to-date as of April 6, 2020, RTH was significantly outperforming the S&P 500, at -9.4% vs -17.2%, respectively,” notes the issuer.