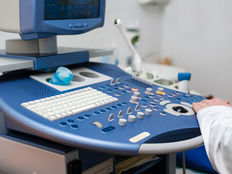 Healthcare ETF IHI Could be Pinched by Trade Wars

The healthcare sector is usually viewed as defensive and derives significant portions of revenue from within the U.S., making the group an ideal sector for investors looking to avoid the trade war controversy. However, one of the sector’s strongest exchange traded funds could be pinched by U.S. tariffs against Mexico.

The previously high-flying iShares US Medical Devices ETF (IHI C+), the largest ETF dedicated to medical device manufacturers, is up 10.42% year-to-date, but some market observers see the fund’s components as potentially vulnerable to a trade spat with Mexico, the largest trading partner of the U.S.

“For the overall medtech space, I think it’s going to be manageable,” RBC Capital Markets analyst Brandon Henry told Barron’s on Friday morning. “In a note out Friday, Henry considered the possible disruptions to the sector, which relies on Mexico for 15% of its imports and 7% of its exports.”

Industry observers argue that medical technology companies can tap into increased healthcare spending among emerging economies while the U.S. market has matured and could experience slower growth. Looking ahead, in the years through 2024, spending growth is projected to average 5.8% and peak at 6.3% in 2020.

“U.S. medical-device manufacturers depend heavily on components imported from Mexico, but one analyst says that the tariffs that President Donald Trump threatened in an evening tweet on Thursday wouldn’t scuttle the industry,” reports Barron’s.

With equity market volatility rising and investors acting jittery due to the lingering US/China trade war, many market participants are favoring defensive sectors and the related exchange traded funds. That rush to defensive ideas is benefiting the previously lagging healthcare sector, the second-largest sector weight in the S&P 500.

Investors embraced healthcare stocks for the sector’s growth and defensive characteristics, providing investors with yields and valuations that are less stretched than other yield-producing stocks like utilities. Some market observers believe the sector’s selloff is overdone and that healthcare stocks could be poised to bounce back.

When it comes to IHI and its constituents, the trade war may just be a short-term blip.

“Henry sees no reason to panic. China is only a moderately smaller trading partner for the U.S. medical-device industry than Mexico, and the Chinese tariffs have had a minimal impact on earnings for medical-device companies,” according to Barron’s.

For more information on the U.S. markets, visit our sector ETFs category.