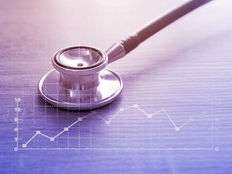 Healthcare-related exchange traded funds were among the best areas of the market Monday as pharmaceutical and biotechnology firms look for ways to combat the coronavirus or COVID-19 outbreak.

Among the best performing non-leveraged ETFs of Monday, the Health Care Select Sector SPDR ETF (XLV A) increased by 4.5%.

The Healthcare sector rallied after Abbott Laboratories (NYSE: ABT) revealed it has a test that can detect the new coronavirus in as little as five minutes and Johnson & Johnson (NYSE: JNJ) said it expects to begin human clinical studies on a vaccine candidate for COVID-19 by September.

The Food & Drug Administration used emergency authorization powers to give the green light to Abbott Laboratories’ testing kit that can detect positive coronavirus results in at little as five minutes, TheStreet reports.

“On Friday, the FDA authorized a new test developed by Abbott Labs that delivers lightning-fast results in as little as five minutes,” President Donald Trump told reporters during a press conference Sunday. “That’s a whole new ballgame. I want to thank Abbott Labs for the incredible work they’ve done. They’ve been working around the clock.”

Johnson & Johnson announced a $1 billion deal with the U.S. government to create enough manufacturing capacity to produce over 1 billion doses of a vaccine, Reuters reports.

“Government and industry is working in unprecedented ways,” BARDA Director Rick Bright told Reuters. The hope is to work “as quickly as possible and manufacture enough of it for us and the rest of the world in a very short timeframe.”

The Biomedical Advanced Research and Development Authority (BARDA), part of the U.S. Department of Health and Human Services, is working with five or six experimental vaccine candidates, with the hopes of having two or three successful vaccines. BARDA is providing about $420 million to Johnson & Johnson to fund research into a vaccine.