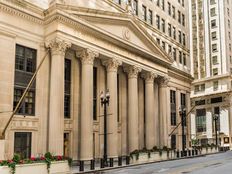 The SPDR S&P Regional Banking ETF (KRE A-), the largest ETF dedicated to regional bank equities, is up just 7.25% this year, about half the gains posted by diversified financial services ETFs. KRE and rival regional bank ETFs could be in for more lethargy if the Federal Reserve continues lowering interest rates.

Unfortunately for KRE and friends, lower interest rates are what regional banks are having to contend with in the current environment.

“Falling rates are a problem because they mean assets that banks purchase will yield less, new borrowers will pay less interest, and current borrowers will have an incentive to refinance at a lower rate,” reports Ben Walsh for Barron’s. “At the same time, many banks are already paying very low-interest rates on deposits, which means there is less room to reduce how much they payout as rates fall.”

Other Bank Issues To Consider

Beyond lower interest rates, there are other factors to consider with regional banks and ETFs like KRE, including declining net interest margins, something large money center banks have already discussed.

And if the yield curve inverts again and remains in that condition for an extended period, KRE could also be pinched.

The yield inversion also makes it harder for asset sensitive banks to turn a profit since they cannot offset falling income from floating rate loans by cutting rates they pay on deposits. On the other hand, larger banks can still rely on wealth management or payment businesses to help keep them afloat.

Additionally, an economic slowdown could mean borrowers encounter difficulty servicing debts, another scenario that would weigh on regional banks.

“And it’s not just rates that have Horowitz worried. He also said that borrowers could have trouble handling their debts if the economy heads into a slowdown. Potential changes to bank regulation as the presidential election approaches are another risk, he said,” according to Barron’s.