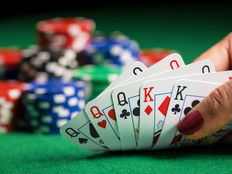 An Interest Rate Cut is Not in the Cards Just Yet

The capital markets are just a week removed from the U.S. Federal Reserve keeping rates steady, but now they’re anticipating the next poker tell that would signal a rate cut. However, Dallas Fed President Robert Kaplan says it’s not in the cards just yet.

In particular, Kaplan referred to the bond markets ringing the alarm on an inverted yield curve.

Fears of an inverted yield curve racked the markets during 2018’s fourth quarter sell-off, but they returned last week as the short-term 3-month and longer-term 10-year yield curve did as such–unveil an inversion that hasn’t been seen since 2007–just ahead of the financial crisis.

The spread between the 3-month and 10-year notes fell below 10 basis points for the first time in over a decade.

“I’d need to see an inversion of some magnitude and/or some duration, and right now we don’t have either,” said Dallas Fed President Robert Kaplan in an interview.

Though the former did manage to appear, Kaplan wants to see the inversion occur for an extended duration prior to considering a rate cut of any sort.

“If you see an inversion that goes on for several months…that’s a different kettle of fish,” he said. “We’re not there yet.”

In poker, a “tight” style refers to being selective prior to making any moves and for the Fed, the parity in playing it tight with respect to interest rate policy is being data dependent. However, in this case, is “tight is right”–another common adage in poker circles–warranted?

Fears of a global economic slowdown could be warranting the tight play–especially last week when Federal Reserve Chairman Jerome Powell said that “we’ve noted some developments at home and around the world that bear our close attention.”

Have you signed up for the ETF Database and ETF Trends Virtual Summit on Wednesday, April 17? It’s complimentary for financial advisors (earn up to 5 CE Credits)! Register now to learn about international markets, specifically weighting value, opportunity and risks.

“Expectations are for a pretty weak first quarter overseas to go along with a fairly weak U.S.,” said Sam Stovall, chief investment strategist at CFRA Research. “The real question is whether it’s just a weak first quarter and then it recovers. Our expectation right now is that it is more of a soft landing.”

“I think we’re just going through a pretty healthy digestion of gains,” said Stovall. “Q1 softness will probably be followed by a recovery in Q2, both on an economic perspective as well as an earnings outlook. I would tell investors you are probably better off buying than you are bailing.”

As far as other Fed officials conceding to the idea of a recession being imminent, they’re not ready to fold just yet.

“I’m not freaked out” by the yield curve inversion, and “hopefully businesses and market participants won’t freak out” either, said San Francisco Fed President Mary Daly during a speech.