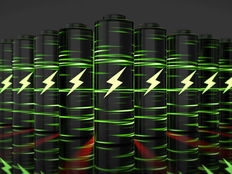 The Global X Lithium & Battery Tech ETF (LIT B-) has had its share of struggles, shedding 15.50% over the past six months, sending its year-to-date loss to north of 10%, but the booming electric vehicle market can still support the lone lithium ETF.

Electric vehicles are in the early innings of development and there are signs that there is a lot of pent up demand among consumers who want to embrace the technology. In 2017, electric vehicle sales represented 1.7% of all vehicle sales globally, exceeding 1 million for the first time and rising 51% year-over-year. The rate could continue to accelerate as a result of EVs becoming more economical than gas-powered cars and as a result of pro-climate regulatory changes pushing to ban gas-powered cars.

“Demand for metals used in battery electric vehicles could rise sixfold if electric cars reach 8% of road traffic by the mid-2020s, delivering huge dividends for producing countries like the Democratic Republic of Congo,” reports Reuters, citing Moody’s Investors Service. “The credit ratings agency said a worldwide shift to electric vehicles would likely drive up demand for cobalt, of which DRC is the world’s number one producer, as well as lithium, nickel, and copper.”

Lithium-ion battery capacity is vital because one of the primary factors car buyers consider when evaluating electric vehicles is how long those vehicles can run on a single charge. Tesla’s dominance in the booming electric vehicle market is becoming apparent.

“By 2030 cobalt production could be equivalent to nearly 16% of DRC’s total GDP last year, more than half of its goods exports and 133% of its government revenue, and significantly boost its fiscal and current account balances, Moody’s wrote,” according to Reuters.

Related: What The Future May Hold For The Lithium ETF

The iShares MSCI Chile Capped ETF (ECH B-) is another way for investors to play the materials side of the EV market.

“Among other battery metal producers, Chile will likely see a more moderate impact, with production of battery metals likely accounting for more than 5% of 2018 merchandise exports and total government revenue by 2030, according to Moody’s,” reports Reuters.