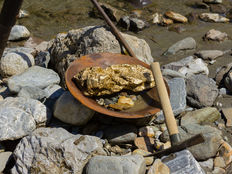 The VanEck Vectors Gold Miners ETF (GDX B+) is on a torrid pace and the ETF’s recent strength is prompting some unusual options activity.

“In the options pits, the VanEck Vectors Gold Miners ETF’s call volume today is pacing in the 90th annual percentile, with over 128,000 calls exchanged so far. Also seeing heavy volume are puts, with 1.7 times the expected intraday amount having changed hands already (66,713 contracts versus about 40,000 expected),” according to Schaeffer’s Investment Research.

GDX, the largest gold miners ETF by assets, is higher by nearly 41% year-to-date, making it one of 2019’s best-performing non-leveraged ETFs.