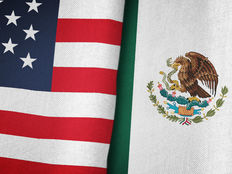 The iShares MSCI Mexico Capped ETF (EWW A) is up about 2.20% over the past month after the U.S. recently decided to not levy tariffs against one of its largest trading partners.

Many previously feared that the escalation in the trade war with our southern neighbor would drag on growth and even send Mexico’s economy into a recession.

“A last-minute deal on Friday, June 7th prevented the US from imposing tariffs on all Mexican exports to the US worth ~$350 billion,” said BlackRock in a recent note. “In exchange for removing the tariffs Mexico agreed to increase enforcement to stop illegal migration and to expand the ‘Remain in Mexico’ plan for asylum seekers.”

Last month, President Trump took to Twitter to say that if Mexico agreed to up purchases of agriculture commodities from U.S. farmers, the tariffs could be averted. Trump originally floated the idea of tariffs on Mexico if the country did not step up to help with the immigration crisis.

A Closer Look at EWW

“The measures taken by Mexico will be evaluated in mid-July. Terms of additional provisions will be finalized in 90 days from the deal,” said BlackRock.

EWW seeks to track the investment results of the MSCI Mexico IMI 25/50 Index, which is a free float-adjusted market capitalization-weighted index with a capping methodology applied to issuer weights so that no single issuer of a component exceeds 25% of the underlying index weight, and all issuers with a weight above 5% do not cumulatively exceed 50% of the underlying index weight.

“While Trump has bipartisan support for the China trade negotiations that was not the case with the tariffs threatened on Mexico, whereby Trump threatened to implement an economic lever in response to an unrelated foreign policy goal,” according to BlackRock.

Investors have pulled $272.27 million from EWW this year.