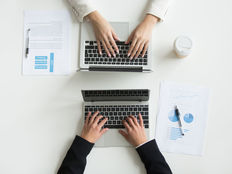 The Technology Select Sector SPDR Fund (XLK A), the largest technology ETF by assets, is higher by a staggering 35% year-to-date and much of XLK’s bullishness is attributable to the sector biggest names, meaning Apple (AAPL) and Microsoft (MSFT).

Those two tech behemoths combine for more than 38% of XLK’s roster. XLK “seeks to provide precise exposure to companies from technology hardware, storage, and peripherals; software; communications equipment; semiconductors and semiconductor equipment; IT services; and electronic equipment, instruments, and components,” according to State Street.

Last week, Apple reported fourth-quarter earnings that bested analyst expectations on Wednesday, as a result of strong performance in services and its fast-growing wearables business. Although Apple’s iPhone business was down 9% year-over-year, the company signaled that it expected a substantial holiday quarter, and Apple stock climbed more than 1% in after-hours trading.

“Technology Select Sector SPDR has nearly 70 holdings, but one stock delivers much of its strength. Almost 19% of assets are invested in Apple (AAPL), one of the best-performing techs since its breakout from a flat base on Sept. 11. Shares are up about 14% from that entry and made new highs Friday,” reports Juan Carlos Arancibia for Investor’s Business Daily.

Pick Up The Momentum

When momentum picks up in the markets, it can be difficult to stop and for investors who are keen on the idea that the momentum can continue through the rest of 2019 can look to momentum-focused ETFs.

Technology has been a prime playground for investors looking to add growth and momentum factors to their portfolios.

In XLK, Microsoft “is the largest holding, with 19.4% of the fund. The stock is also trading at new highs, although it is up just 1% from the 142.47 buy point of last Monday’s breakout. Microsoft also beat profit estimates and hit a new high after winning a huge Pentagon cloud contract,” according to IBD.

With third-quarter earnings winding down, it’s important to note that Apple, Microsoft and plenty of other XLK components delivered solid Q3 results.

“Technology is beating Q3 profit expectations by more than any other sector, and 85% of companies are beating earnings expectations,” reports IBD.