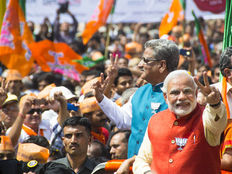 The recent reelection of Narendra Modi as India’s prime minister has investors renewing their enthusiasm for India, Asia’s third-largest economy and they are embracing the iShares MSCI India ETF (INDA C+) as a result.

INDA seeks to track the investment results of an index composed of Indian equities. The fund offers exposure to large and mid-sized companies in India, and provides targeted access to the Indian stock market. The WisdomTree India Earnings ETF (EPI C+) has also been seeing inflows since Modi’s victory.

“The $5.4 billion iShares MSCI India exchange-traded fund, ticker INDA, lured more than $182 million last week, the most in more than four years, data compiled by Bloomberg show. Investors also added the most since September to the $1.5 billion WisdomTree India Earnings Fund, or EPI, in the period through Friday,” according to Bloomberg.

Modi was first elected in 2014, pledging to revive growth and combat corruption. India’s equity market has steadily strengthened under his guidance.

Looking ahead, many anticipate a Modi win will be a continuation of the status quo rather than signs of any major reforms. Modi has promised support for India’s population of agricultural workers, increased infrastructure investment and more youth jobs.

Goldman analysts project Indian corporate earnings to expand 16% in 2019, the fastest clip in the region. Nevertheless, the fast pace may be partly attributed to the poor results a year ago for banks that were burdened by nonperforming loans.

“Modi was sworn in last Thursday for a second five-year term, making him the country’s first premier to be re-elected with a majority since 1984,” reports Bloomberg. “INDA has risen for the last three weeks, the longest streak of gains since mid-March. India’s key equity indexes resumed their rally since Modi’s victory May 23, and closed at record highs on Monday.”

Market sentiment also strengthened on a boost in India’s services and manufacturing activity, which both gained momentum earlier this year, driven by rising new work orders that fueled a faster increase in output and job creation. However, the timing of investors scurrying to India ETFs could prove bad.

“But investors could be arriving in India at just the wrong time. The U.S. plans to end the country’s designation as a developing nation from June 5, thereby eliminating an exception that allowed India to ship close to 2,000 products to the U.S. duty-free,” according to Bloomberg.