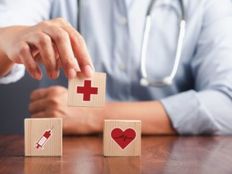 Sanguine Regulatory Outlook Not Much Threat For 'BBH'

A change in leadership in the Oval Office often stirs talk about the regulatory environment for the healthcare sector. That talk is often elevated when one party controls the presidency and both houses of Congress, as is the case today.

That doesn’t mean investors need to fret about exchange traded funds, such as the VanEck Vectors Biotech ETF (BBH B-). Biotech companies, including BBH components, often work on breakthrough drugs or therapies targeting currently unmet needs. As such, drug prices in these arenas often run high, which can draw politicians’ ire. For now, it looks like the Biden Administration is looking to other areas to lower costs.

“Despite these headwinds for new drug pricing laws, as well as the Biden administration’s initial focus on COVID-19 relief and infrastructure, we expect new laws will emerge with more focus on targeting the out-of-pocket spending by patients versus absolute drug prices,” writes Morningstar analyst Karen Andersen.

Healthcare reform is often a hot-button issue on Capitol Hill because many view the debate as pitting patient outcomes against investor outcomes. To that end, they believe there should not be any debate at all.

For those considering BBH, the potential good news is that the current reforms on the table and those likely to see the light of day don’t appear to threaten the investment thesis for BBH holdings.

“Overall, the reforms that we see as most likely to pass in the next several years are unlikely to affect the intrinsic values of these firms significantly, but cost-effectiveness analysis remains a potential long-term driver of more significant policy changes in the United States,” according to Morningstar’s Andersen.

Something else for investors to monitor with BBH and other healthcare ETFs: Drug pricing reform has links to environmental, social, and governance (ESG) principles, and that relationship is likely to get stronger over time, not wane.

“Focusing on access, which is closely tied to drug pricing, we see U.S. drug pricing reform as a key area of environmental, social, and governance risk for biopharma, given U.S. premium pricing, the size of the U.S. market, the Democratic-controlled Congress, and the numerous proposals and bills that are being considered,” notes Andersen.