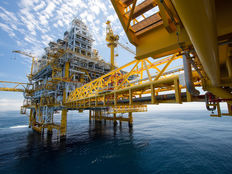 Oil ETFs Could be Heading Higher

USO is up more than 37% this year while BNO is higher by 31.64%. Some market observers believe crude can push higher this summer, perhaps approaching $80 per barrel.

In January and February, oil notched its best two-month performance since 2016 when prices bounced in April and May following a precipitous plunge that sent prices below $27 per barrel, the Wall Street Journal reports. Robust demand, a critical factor with any commodity, is seen propping up oil prices.

Current OPEC compliance with production cut plans remains above their historical average, and it usually takes between two to three quarters for inventories to normalize after the cuts. While demand has yet to catch up to elevated supplies, rebounding economies in Europe and steady economic growth in the U.S. could prompt more upside for oil this year.

Looking ahead, fundamentals are improving. The International Energy Agency projects consumption to increase each quarter of 2019 year-over-year, albeit at a slower-than-usual pace for the first quarter. Meanwhile, on the supply side, Saudi Arabia and other members of the Organization of Petroleum Exporting Countries have been cutting output. Additionally, U.S. sanctions on Iran and Venezuela have reduced further bets on international supplies.

“Howeer, RBC warns that the fate of global oil consumption largely rests with China and India, which together account for nearly 55 percent of demand growth,” according to ETF Daily News. “While fears of a sharp economic slowdown may be overblown, the degree to which demand depends on a few markets remains an underappreciated risk that could push down oil prices.”