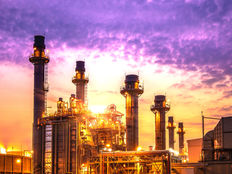 Oil Services ETFs Off To Impressive 2019

With oil notching one of its best first-quarter performances on record, oil services stocks and the related ETFs are off to impressive starts this year. For example, the VanEck Vectors Oil Services ETF (OIH B+), the largest oil services ETF, jumped more than 23% in the first quarter.

Earlier this year, OPEC issued a list of oil production cuts by its members and other major producers for the next six months starting January 1 to bolster confidence in the global crude oil markets as the cartel and its allies move to cut supply to combat the global glut, Reuters reports.

Even with the run-up in oil services names, some of the industry’s marquee components remain attractively valued.

“With oil pushing higher and drilling permits also starting to spike up, the analysts at SunTrust Robinson Humphrey are positive on second-quarter activity that could prove to be a strong catalyst for the sector,” reports Lee Jackson for 24/7 Wall Street. “We screened the firm’s coverage universe for oilfield services and found four top companies that are leaders in the sector that look like solid ideas now. All are rated Buy.”

Schlumberger and Halliburton Co. (HAL) combine for over 35% of OIH’s weight.

“SunTrust has noted in the past that Halliburton’s business is dependent on commodity prices. As economic cycles proceed, commodity prices fluctuate. A low-price environment triggered by anemic economic growth or excessive production growth would limit demand for goods and services. With oil rising strongly this year, the worst for the company may be over,” according to 24/7 Wall Street.

Oil’s hard fought rebound this year has also come off a steep decline. Crude prices plunged 44% from a multi-year high in early October through the nadir on Christmas Eve as investors ditched energy in response to rising pessimism over global economic growth and potentially diminished demand across a range of commodities.

Have you signed up for the ETF Trends Virtual Summit on Wednesday, April 17? It’s complimentary for financial advisors (earn up to 5 CE Credits)! Register now to learn about alternative and thematic tools to better diversify client portfolios.