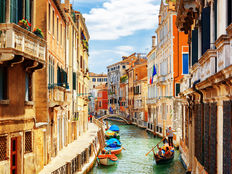 A Refreshed View on Europe ETFs

The iShares MSCI EMU ETF (EZU A-) and other Eurozone-focused exchange traded funds are trading higher this year. EZU, one of the largest funds in that group, is higher by more than 14% and some market observers are betting on more monetary stimulus by the European Central Bank (ECB) to prop up the region’s fragile economies.

As the markets rebounded from the last year’s pullback, many shunned the European markets. However, some may want to look back into Europe region-related ETFs as some of bumps are smoothed out.

“Euro-zone growth is supported by accommodative monetary policy, a more expansionary fiscal policy stance, higher than normal capacity utilization rates and labor markets approaching full employment,” said BlackRock in a recent note. “Our financial conditions indicator (FCI) shows that euro-zone conditions have eased significantly in the first part of 2019 – an improvement that is on par with the one seen in early 2016. For that reason, we expect GDP growth to pick up and move slightly above trend levels (around 1.25%) in the second half of this year.”

The $7 billion EZU tracks the MSCI EMU Index and holds nearly 250 stocks. EZU has a three-year standard deviation of just over 13%. France, the Eurozone’s second-largest economy behind Germany, commands 35% of EZU’s geographic weight. Germany is 27.46% of the fund’s weight.

“Industrial data for the start of the year are still poor. Germany–where factory orders plunged in February–remains the weakest link,” said BlackRock. “But other data–especially for the services sector–are holding up or starting to recover. And incoming information on near-term growth tentatively suggests building momentum at the start of the second quarter.”

“The GDP forecast downgrades that began at the start of 2018 may have nearly run their course. Historically, our GPS signal has led consensus forecasts by about three months,” according to BlackRock. “This suggests that investors still have some time to position themselves for potential forecast upgrades.”

For more information on the European markets, visit our Europe category