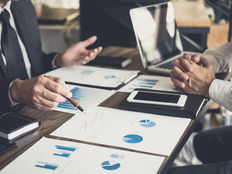 Recently released results of the Federal Reserve’s Comprehensive Capital Analysis and Review, or CCAR, pave the way for major U.S. banks, such as Bank of America (BAC) and JPMorgan Chase & Co. (JPM), among others, to significantly increase share buybacks and dividends.

Regional banks are expected to get in on the act, too. The SPDR S&P Regional Banking ETF (KRE A-), the largest regional bank exchange traded fund, has a dividend yield of just 2.21%, implying plenty of room for dividend growth.

“After the Fed gave the big banks the thumbs-up on June 27 on their plans to repurchase shares and pay dividends in the next 12 months as part of its Comprehensive Capital Analysis and Review process, some of the regional banks joined the party as well,” reports Lawrence Strauss for Barron’s.

A Look Ahead for KRE

While the Fed’s CCAR program typically looks at the largest domestic banks and U.S. operating units of some large foreign banks, big regional banks are expected to be part of the review next year.

“These smaller banks, which each have assets totaling under $250 billion, will be included in the capital-planning reviews every other year starting in 2020,” according to Barron’s.

Helped by some recent mergers and acquisitions activity and improved sentiment toward the broader financial services sector, KRE and friends are rebounding this year and some analysts think that trend can continue. KRE and rival regional bank ETFs are soaring even as speculation swirls the Fed could lower interest rates this year.

For more information on the financial sector, visit our Tactical Allocation Channel.