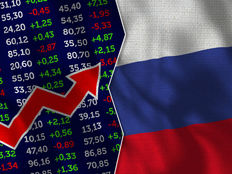 “Foreign investors are piling back into Russian bonds, attracted by high yields and the country’s relatively strong finances compared with emerging-market peers,” a Wall Street Journal report noted. “Despite a heavy reliance on oil exports and tense relations with the West, investors say yields on Russian government bonds are attractive given its ability to withstand oil-price volatility. Russia marked its eighth straight week of inflows into its bonds on July 23, according to data from fund tracker EPFR Global, only outdone by China.”

“Russia’s ruble bonds have extremely high real rates, once you adjust by macroeconomic fundamentals,” said Joseph Mouawad, a fund manager in the international bonds team at Carmignac. “Russian debt is actually one of our favorite EM debts at the moment.”

The report noted that Russia has a low debt percentage per GDP compared to other emerging markets countries in addition to strong central bank reserves.

“We’ve been generally positive on Russia over the past year or so,” said Kaan Nazli, economist and portfolio manager at Neuberger Berman. “Mainly because, although they’re not orthodox on foreign policy, they’re pretty serious on economic policy.

When it comes to looking at single country opportunities with exchange-traded funds (ETFs), there’s the Franklin FTSE Russia ETF (FLRU) for Russia exposure. FLRU seeks to provide investment results that closely correspond, before fees and expenses, to the performance of the FTSE Russia RIC Capped Index (the FTSE Russia Capped Index).

Here are a pair of other funds to consider: