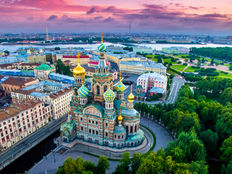 Russia’s Post-Covid Policies Will Be a Game of Chess

Chess and creating economic policies both involve strategy. As Russia continues to rebound from the Covid-19 pandemic, it will be interesting to see what moves the country’s leaders have in store and whether this can benefit Russia-focused exchange-traded funds (ETFs).

“Experienced chess players can calculate positions on the board seven, ten, and even more moves ahead. It certainly takes time and practice to develop such a skill,” a National Interest article surmised. “Yet even the most talented player still faces a problem: you do not know how the opponent would respond. Assessing various probabilities of the opponent’s moves and then picking the best options for answers is a daunting task.”

The article also noted that while foreign policy isn’t a game, “the chess analogy works here well: despite the uncertainty of unknown factors and sudden changes, most foreign governments tend to act rather predictably based on a certain ‘policy climate’—that is, most accepted views embraced by decisionmakers and their advisers. Can we predict Russia’s behavior judging the current policy climate in Moscow?”

Check(mate) Out These Russia ETFs

Per a recent Bloomberg report, Russia only recently “became only the fourth country to report more than 1 million cases of Covid-19, its economy is coming through the pandemic better than most other big emerging markets. Analysts say the outlook could yet improve.”

“When the pandemic broke out, Russia was in pretty good shape: low inflation, low unemployment, stable banking sector, and huge reserves,” Renaissance Capital Chief Economist Sofya Donets said by phone from Moscow. “If there are no additional shocks, there will be a wave of forecast upgrades for Russia’s economy this year.”

“Renaissance is among the most upbeat on the outlook, forecasting a contraction of 3.3% this year and a 3.8% rebound next,” the article added. “Even the current Bloomberg survey, which shows a 4.8% shrinkage this year, is less than half what the government feared when the virus first hit.”

For investors sensing an opportunity on Russia improving its economic standing in a post-Covid-19 environment, here are a pair of other funds to consider to get Russia exposure: