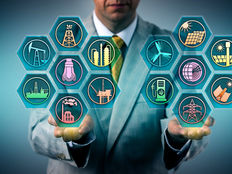 A Sector Growth And Value Investors May Just Like

Growth and value stocks are usually two distinct groups, but there occasions when some sectors embrace traits of both investment factors. That may be what’s happening with healthcare, the S&P 500’s second-largest sector weight, today.

The SPDR Health Care ETF (XLV A), the largest healthcare ETF by assets, and rival healthcare have been laggards this year, but XLV is higher by 6% over the past month, bringing its year-to-date gain to just over 10%. Recent strength in the sector could lure both growth and value seekers.

Christian Fromhertz, founder and CEO of Tribeca Trade Group, said in a recent interview with CNBC that XLV is starting to show signs of life.

“The whole group is starting to shift up,” Fromhertz said. “What I like about the ETF … [is]it captures both value and growth in there. So, really, as we’re seeing a see-saw back and forth between the two, I think this is a great way to play it.”

Among other factors, XLV and friends have been dogged this year by speculation that Medicare For All could become a reality if Democrats win the White House in 2020. Many of the most visible Democratic contenders for that party’s 2020 presidential nomination are embracing Medicare For All. However, XLV’s recent price action suggests the benchmark healthcare ETF is shaking out of its slumber.

“Health Care has been the worst-performing sector in 2019, as regulatory pressures related to drug pricing, insurance, and the opioid crisis have increased as the election draws nearer,” said State Street in a recent note. “This has weighed down the sector’s valuations to the lowest level since 2016 and made it the least expensive sector in the S&P 500 Index.”

However, healthcare stocks, at least for now, have appeared to shake out of the politically-induced doldrums seen earlier this year and XLV’s compelling growth/value mix could prove attractive over the near-term.

“From the more stable, slower growers like Merck (MRK) and Eli Lilly (LLY) to the more growth-prone plays like Thermo Fisher Scientific (TMO) and AbbVie (ABBV), the XLV can give investors exposure to a quality blend of value and growth stocks, and it can do so on the cheap, Fromhertz said,” reports CNBC.