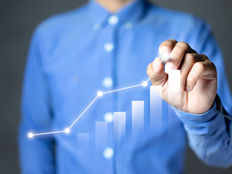 Sustainable competitive advantages have helped companies maintain their edge in an ever changing environment. Investors can also tap into these companies through a targeted exchange traded fund strategy focused on companies with wide economic moats.

“MOAT is in the top percentile, among its peers, for the five-year period,” Rakszawski told ETF Trends. “So, really a very sound strategy that has delivered from a total return perspective.”

For example, KLA Corp. (KLAC), Applied Materials Inc. (AMAT) and Facebook (FB) were among the top contributors to Moat Index performance, according to a new VanEck blog article.

“Each company benefits from sustainable competitive advantages according to Morningstar equity analysts, and the Moat Index allocated to these companies at attractive entry points based on their market price relative to Morningstar’s assessment of fair value,” according to VanEck.

The underlying Moat Index outperformed the S&P 500 Index in 2019 by more than four percentage points and led in all standard trailing periods for the past decade.

KLA Corp. was selected because it stood out as a powerhouse in the semiconductor industry. According to Morningstar, the chipmaker’s portfolio process, diagnostics and control tools combined with its leading technical expertise allow its products to be incorporated in every major chip manufacturing facility across the world.

Applied Materials also exhibited a similar near-term allocation characteristic in the Moat Indexing methodology. AMAT provides semiconductor manufacturing equipment and benefits from intangible assets related to its equipment design expertise and R&D cost advantages, according to Morningstar. Consequently, AMAT is now involved in making almost every chip in the world.

Additionally, Morningstar assigned Facebook a wide economic moat rating because of the social media giant’s network effect around its massive user base and intangible assets related to user data.

The Morningstar Economic Moat Rating methodology assign an economic moat rating to companies, but it also focuses on those that show attractive valuations or are more attractively priced. Beyond factor effects, stock selection is also an important driver as the underlying indices combine both quality and valuation to help investors potentially generate improved returns.

According to Morningstar’s indexing methodology, there are five sources of economic moats: Intangible assets that include brand recognition to charge premium prices. Switching costs that make it too expensive to stop using a company’s products. Network effect that occurs when the value of a company’s service increases as more use the service. A cost advantage helps companies undercut competitors on pricing while earning similar margins. Lastly, efficient scale associated with a competitive advantage in a niche market.