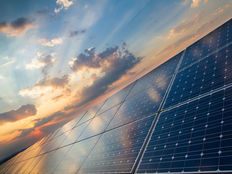 Up more than 55% year-to-date, the Invesco Solar ETF (TAN B), a renewable energy ETF, is one of 2019’s best-performing non-leveraged ETFs and it appears investors are taking note of the solar fund’s shine.

Up more than 55% year-to-date, the Invesco Solar ETF (NYSEARCA: TAN), a renewable energy ETF, is one of 2019’s best-performing non-leveraged ETFs and it appears investors are taking note of the solar fund’s shine.

TAN and its components can be volatile investments and the solar industry has had its bouts of volatility and struggles in the past. The tariffs pinched the solar industry, creating job losses, but state initiatives, including California’s push to require all new homes built in 2020 and beyond to include solar panels, are bolstering the solar industry.

Still, investors have funneled more than $63 million into the fund this year.

“Despite a recent bout of weakness, clean-energy stocks have been on a tear as tariffs imposed by President Donald Trump on imported solar equipment gradually decline,” reports Bloomberg. “Meanwhile, the outlook for greater use of renewables has also improved, further burnishing the appeal of companies like First Solar Inc., one of TAN’s largest holdings.

Along with the macro worries over oil, the solar industry is also enjoying strengthening fundamentals, with increased demand for solar panels. According to Wood Mackenzie Power & Renewables research, the portion of U.S. large-scale solar pipeline attributed to commercial and industrial off-takers continues to expand, GreenTechMedia reported.

Declining costs are playing a significant role in the increased adoption of clean energy sources, a theme that bodes well for TAN’s long-term trajectory. Competitive pricing and the potential for Chinese subsidies are among the catalysts that could boost TAN further this year.

“Solar and wind are now the cheapest forms of power in two-thirds of the world. Meanwhile, the Solar Energy Industries Association recently said the U.S. pipeline for utility-scale projects had reached 37.9 gigawatts, a record,” according to Bloomberg.

About two-thirds of TAN’s components are classified as small-cap stocks.