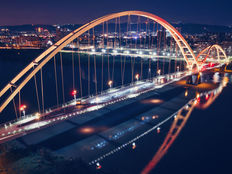 Taiwanese stock are often among the least volatile in the emerging markets space and the iShares MSCI Taiwan ETF (EWT A-) is up 13% year-to-date, but the global investors don’t appear enthusiastic about the country’s equity market.

To some extent, Taiwan has been caught in the middle of the US/China trade spat, but EWT’s performance indicates Taiwan is flexing its independence rather than siding with China as China would prefer.

While Chinese President Xi Jinping supports the notion that China and Taiwan must stand together unified, the U.S., on the other hand, supports the country’s efforts to stay independent. Chinese officials, however, have openly stated that military force is an option in order to maintain unity between the two nations.

“Even with the benchmark Taiex Index near a record high, managers have pulled almost $1 billion from Taiwan stock funds this month, more than any other market in the region,” reports Bloomberg. “The withdrawals come even as corporate dividends top U.S. yields and just as a record amount of debt globally yields less than zero.”

The $3 billion EWT, which tracks the MSCI Taiwan 25/50 Index and recently turned 19 years old, holds 89 stocks and its potential sensitivity to global trade wars is understandable because the fund allocates nearly 52% of its weight to technology stocks. Alone, Taiwan Semiconductor (NYSE: TSM) accounts for over 22% of the fund’s weight.

Some researchers argue that countries exporting similar products that compete with China could end up as beneficiaries in the trade war between the U.S. and China, the Wall Street Journal reports.

For example, Bank of America Merrill Lynch economists predict Taiwan, Vietnam and South Korea have the most to gain, given the countries’ similar export profiles to China.

“Investors who leaped into Taiwan stocks earlier this year aren’t eager to do it again: the economy’s firms are so entwined with the global technology supply chain that they’ve been particularly vulnerable to the trade war and a slowdown in the smartphone market,” according to Bloomberg.

There is some evidence that the US/China trade tiff is weighing on Taiwan.

“The main problem has been the trade friction between the world’s two largest economies,” reports Bloomberg. “Taiwan’s export orders have dropped for the seven months through May. Tech stocks, which account for nearly half of the Taiex gauge, have been whipsawed as the U.S. banned companies from supplying China’s Huawei Technologies Co.”

For more information on the Asian markets, visit our Asia category.