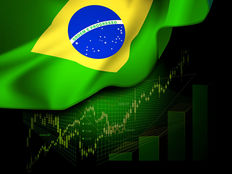 Steel ETF Lifted After Reinstated Tariffs Against Brazil and Argentina

The VanEck Vectors Steel ETF (SLX B+) was trading higher early Monday after President Trump took to Twitter to announce that he’s renewing tariffs on imported steel from Argentina and Brazil.

SLX tries to reflect the performance of the NYSE Arca Steel Index, which follows global companies involved in the steel industry. While more than a third of SLX’s lineup is allocated to U.S. steel producers, the ETF has a heavily global tilt, including exposure to ex-US developed markets and emerging markets steel companies.

Early in his presidency, Trump enacted tariffs aimed at supporting domestic steelmakers, a move that sent SLX higher by 24.5% in 2017. It remains to be seen if the new round of trade levies will have the same effect. SLX entered Monday with a year-to-date gain of 5.4%.

“Brazil and Argentina have been presiding over a massive devaluation of their currencies. which is not good for our farmers,” said the president on Twitter. “Therefore, effective immediately, I will restore the Tariffs on all Steel & Aluminum that is shipped into the U.S. from those countries.”

The SPDR Metals & Mining ETF (XME A) is another ETF that could be boosted by rising steel equities. XME tries to reflect the performance of the S&P Metals & Mining Select Industry Index, which is designed to track the metals and mining segment of the S&P Total Market Index, a broad U.S. equity market index. However, unlike the traditional cap-weighted indexing methodology, XME follows a more equally weighted approach.

“Brazil has a lot of low-cost iron ore. Brazil, along with Australia, dominates the global trade in that steelmaking raw material,” reports Al Root for a Barron’s. “The country is also a significant producer of steel. Brazil ranks ninth globally, producing about 40 million metric tons of steel annually. China is the global behemoth, producing about half of the 1.8 billion tons of steel made each year.”

Since President Jair Bolsonaro took office in Brazil last year, he and Trump have gotten along well, but a new round of steel tariffs could test that relationship.