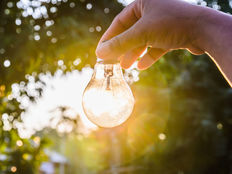 The Energy Select Sector SPDR (XLE A), the largest equity-based energy ETF, is in free fall, having tumbled nearly 10% this month as it labors 28% below its 52-week high, but some analysts believe XLE could be an interesting play on the inverted yield curve.

XLE’s recent woes have the ETF trading below its 50- and 200-day moving averages, giving short-term traders little reason to approach the fund from the long side. XLE hasn’t closed above its 200-day line since late April.

Opportunity In The Oil Patch

Energy ETFs, such as XLE, have also been highlighted as potential winners under lower U.S. interest rates.

Additionally, analysts warned of tensions in the Middle East relating to Iran, which could further add to oil supply uncertainty in the region. The contentious relations between the U.S. and Iran have helped lift crude prices in recent months, with Iran beginning to enrich uranium above limits set out in the 2015 nuclear accord in response to heightened U.S. economic sanctions.

“Energy stocks have an especially strong track record of outperformance following yield flips, and the fact that they’ve been ‘beaten down’ should provide some cushion to any potential market weakness,” according to Bartels, reports Bloomberg. “She recommends the Energy Select Sector SPDR Fund, or XLE, as the best way to gain exposure to the industry. Since 1965, the sector has outpaced the broader equity market 80% of the time in the 12 months that followed yield curve inversions, the study showed.”

Aggressive traders looking to bet on further declines for the energy sector may want to consider the Direxion Daily Energy Bear 3X Shares (ERY B). ERY seeks daily investment results equal to 300% of the inverse of the daily performance of the Energy Select Sector Index, the same index XLE tracks.