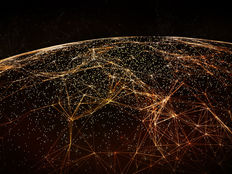 Think On This Global Energy ETF For Dividends

The energy sector has had its share of struggles this year, but there are some points in favor ETFs dedicated to this group, including value tilts and above-average dividend yields. Those traits apply to the iShares Global Energy ETF (IXC A-).

The $868 million IXC, which tracks the &P Global 1200 Energy Sector Index and holds 62 stocks, is higher by nearly 4% over the past week, an impressive showing when considering it was accrued against the backdrop of concerning supply/demand headlines.

Last week, American Petroleum Institute disclosed yet another estimated weekly increase in U.S. oil inventories, the Energy Information Administration rejected it, reporting a drawdown of 1.7 million barrels for the week to October 18.

This interrupted a month-long chain of crude inventory builds as prices moved lower on global economic growth concerns and its negative impact on oil demand. Last week, the EIA reported a 9.3-million-barrel increase in inventories sending prices plummeting. Still, some market observers see opportunity with some of IXC’s big-name components.

Delving Into The Dividend Discussion

“We think the major integrated oil group offers a bevy of opportunities for dividend-focused investors,” said Morningstar in a recent note. “Currently yielding anywhere from 4% to 6.5%, the group is largely undervalued based off our assumptions. At those dividend levels, they are trading at historically high levels compared to decades ago, when they traditionally yielded anywhere from 3% to 4%. However, we do not see dividends at risk.”

“Royal Dutch Shell and Total stand out with the greatest opportunity in our opinion,” according to Morningstar. “Shell, yielding nearly 6.5%, has grown cash flow steadily over the past eight quarters, and we expect it to continue to do so. In fact, management’s current plans call to return $125 billion in dividends and share purchases during the next five years. That’s nearly half its current market cap.”

IXC has a trailing 12-month dividend yield of almost 4%.