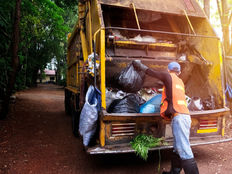 This ‘Trash’ ETF Has Quadrupled in Just 15 Years

For all the talk about environmental responsibility and sustainability, the role that haulers play in that equation is frequently overlooked.

Investors shouldn’t make that mistake. Take the case of the VanEck Vectors Environmental Services ETF (EVX B-). EVX doesn’t get the attention it deserves in the environmental investing conversation, but the exchange traded fund has quadrupled in value in its nearly 15 years on the market.

“Two private companies, Waste Management and Republic Services, lead the solid waste management sector. Together they own about 480 landfills out of the 2,627 landfills across the United States. The two companies have seen staggering performance in the market, with the stock prices of both doubling in the past five years,” reports Nathaniel Lee for CNBC.

Republic Services (RSG) and Waste Management (WM) are EVX’s top two holdings, combining for almost 20% of the ETF’s weight, according to issuer data.

Of note to long-term investors is the mostly recession-proof nature of this business – folks always need trash hauled – and the toll road-like revenue model offers top- and bottom-line visibility.

“In 2020, municipal solid waste landfills had an average tipping fee of $53.72 per ton. That translates to roughly $1.4 million a year in approximate average gross revenue for small landfills and $43.5 million a year for large landfills just from gate fees,” according to CNBC.

Tipping fees are what landfills charge trucks for dropping off trash and like any other fee, there’s room for increases. Tipping fees have nearly tripled since 1982.

EVX also offers two ESG-related opportunities. First, some landfill operators generate addition through a practice known as mining. That occurs when aging landfills are searched for materials that can be recycled into other products.

Additionally, scientific advancements allow for the methane gas emitted at landfills to be harnessed and turned into usable power, creating another revenue stream for some EVX components.