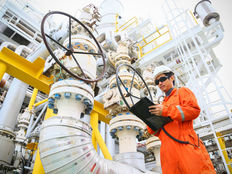 For example, the Energy Select Sector SPDR (XLE A), the largest equity-based energy exchange traded fund, is lower by nearly 9% this month.

Other factors are also contributing to the lower energy outlook. Eurozone business growth expanded less than expected this month, reflecting a slowing economy in Europe. Additionally, tensions between the U.S. and Iran are diminishing, which may reverse some of the risk premium related to the Iran oil trade.

“After a poor first-quarter showing for many of the oil and gas companies within these ETFs, ‘it’s going to require somewhat of a steel stomach to step back into this marketplace,’ said Matthew Bartolini, managing director and head of SPDR Americas Research at State Street Global Advisors,” in an interview with CNBC.

Earlier this month, trade tensions escalated in response to China’s announcement of retaliatory tariffs on U.S. goods. Beijing said it would lift tariffs on U.S. products to as high as 25% after the U.S. on Friday increased tariffs on $200 billion on Chinese goods to 25% from 10%.

Even with oil’s recent declines, the U.S. is pumping crude at near record levels and is one of the world’s top exporters of the commodity, stoking speculation the U.S. could use oil as a weapon if the trade war with China advances.

“Bartolini advised those steel-stomached investors to seek value in drilling companies rather than oil-service companies, which tend to have major revenue exposure to overseas markets,” according to CNBC.

Historical trends also indicate several equity-based energy ETFs also perform poorly late in the second quarter and into the third quarter. Additionally, several of the S&P 500 that typically perform poorly in May are energy stocks.

Aggressive traders looking to bet on further declines for the energy sector may want to consider the Direxion Daily Energy Bear 3X Shares (ERY B). ERY seeks daily investment results equal to 300% of the inverse of the daily performance of the Energy Select Sector Index, the same index XLE tracks.