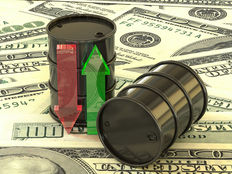 With oil prices consistently probing multi-year if not multi-decade lows, a toll is being taken on equity-based energy ETFs, such as the Vanguard Energy ETF (VDE A). The tough times don’t appear to be ending anytime soon.

In fact, things could worsen for ETFs such as VDE as market observers increasingly speculate that even the largest oil companies could consider ending buybacks and suspending dividends as a means of conserving cash as oil prices languish.

“Lower-for-longer crude oil prices will not only trigger capital expenditure cuts by the integrated oil and gas majors but could also prompt them to suspend share buybacks, re-introduce scrip dividends, and eventually reduce dividends to preserve cash and minimize their leverage to oil prices that have now fallen below $30 per barrel and cash breakeven levels that have tumbled more than 50%, according to analysts,” reports S&P Global Market Intelligence.

Meanwhile, market observers are concerned that the spread of the virus will crimp global economic activity, like what has happened in China after Beijing implemented strict quarantine controls that has stopped major industrial centers.

While demand side fears dragged on the energy market, oil prices failed to find support from a shutdown of most of Libya’s crude output and a renewed supply pact between the Organization of the Petroleum Exporting Countries and allies including Russia, a group known as OPEC+, to stabilize the oil market.

“First and foremost, the majors will use their balance sheets to protect current dividends in the near term, but dividend coverage erodes rapidly depending on how much further oil prices fall and how long it takes for them to recover, analysts said,” according to S&P Global Market Intelligence.

A major problem for VDE’s biggest components Exxon Mobil (XOM) and Chevron (CVX) is that Brent crude prices currently reside nowhere breakeven levels for those companies. For Chevron, a breakeven price of $49 isn’t unreasonable, but an Exxon’s Brent breakeven of $82 per barrel seems far off.