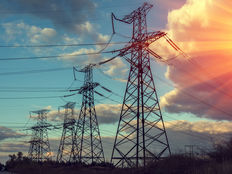 The Utilities Select Sector SPDR (XLU A), the largest utilities sector exchange traded fund, is higher by nearly 14% year-to-date and some market observers assert that some defensive sectors are getting pricey, but reasons remain to consider utilities ETFs.

The utilities sector is one of this year’s best-performing groups, underscoring the notion that many investors will embrace utilities stocks and exchange traded funds during favorable interest rate environments. The Federal Reserve recently obliged by lowering interest and another rate cut is possible before the end of this year.

“But utilities have gotten more expensive in recent months, amid signs of a global slowdown and intensifying geopolitical tensions,” reports Lawrence Strauss for Barron’s. “The utilities SPDR, a good proxy for large U.S. utility stocks, trades at 18.8 times its expected earnings over the next 12 months. That’s well above its five-year average of about 17 times, according to FactSet.”

Investors who are looking for companies to invest in that carry minimal risk will often consider utility stocks. Utility companies typically comprise the most fundamental necessities, such as food, water and shelter, or are closely related to the energy required to refrigerate food, heat up water and light up a house.

At a time when some sectors are being slammed due to the reemergence of trade tensions between the U.S. and China, utilities stocks hold some allure for investors because the sector generates nearly all of its revenue on a domestic basis. S&P 500 utilities companies, on average, depend on the U.S. for 95% of their revenue.

The sector’s highly domestic nature has been an advantage at a time of escalating trade tensions between the U.S. and major trading partners, such as China. Additionally, XLU yields almost 3.10%, well above the dividend yield on the S&P 500 or 10-year Treasury yields.

With that tempting yield, XLU can be seen as a better alternative to some corporate bond funds.

“Stephen Byrd, a Morgan Stanley utilities analyst, thinks that the dividends of regulated utilities are attractive, compared with BAA-rated corporate bonds, whose yields were recently about 1.6 percentage points above those of regulated utilities, on average,” according to Barron’s. “That yield spread is about a full point lower than the average of 2.5 points dating to 1985.”

Year-to-date, investors have added about $360 million to XLU.