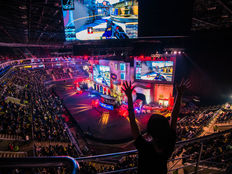 The VanEck Video Gaming and Esports ETF (ESPO) is officially a year old and by most accounts, the e-sports ETF has impressed in its first 12 months on the market.

In its first year on the market, ESPO has hauled in $39.3 million in assets, a solid sum for a thematic ETF. More importantly, the fund has returned just over 28% year-to-date. Data confirm that ESPO is at the center of some epic growth trends.

“Esports revenue growth has increased almost 40% annually since 2015 with recent estimates showing the global esports market surpassing $1 billion in revenues for calendar year 2019,” according to VanEck. “Much of that is driven by the increasing sponsorship dollars flowing to esports organizations as the global competitive gaming audience continues to rise, expected to reach 454 million for 2019.”

“Among thematic funds, ESPO is somewhat conservatively positioned with large allocations to familiar names, such as Nvidia (NVDA) and Advanced Micro Devices (AMD), a trait that should appeal to a broader swath of investors,” according to InvestorPlace.

Adding to the long-term thesis for ESPO is that video games are the fastest-growing form of entertainment in the world.

“This completely new form of entertainment and the video game industry it has grown out of are upending traditional sports and entertainment and seeing rapid growth, driven by a young, affluent audience,” said Ed Lopez, Head of ETF Product at VanEck.