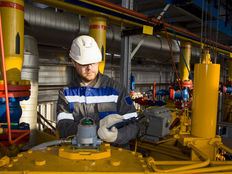 Broadly speaking, the energy sector and the related exchange traded funds have been performing well this year. However, the VanEck Vectors Oil Refiners ETF (CRAK ), the only exchange traded fund dedicated to oil refiners, is lagging with a year-to-date gain of just 1.55%.

Recently, CRAK has shown some signs of life, gaining more than 4% over the past week and some market observers see upside for select oil refiners. CRAK, which is nearly four years old, follows the MVIS Global Oil Refiners Index.

That index “is a rules-based, modified capitalization weighted index intended to give investors a means of tracking the overall performance of companies involved in crude oil refining which may include: gasoline, diesel, jet fuel, fuel oil, naphtha, and other petrochemicals,” according to VanEck.

“Stocks of oil refiners have struggled since companies in the industry reported first-quarter earnings, and they’ve been even worse since the trade war escalated,” reports Avi Salzman for Barron’s. “But Cowen analyst Jason Gabelman sees the slump as a buying opportunity, given that the margins refiners earn for processing gasoline have been strong.”

Stabilizing crude oil prices and potential production increases from U.S. shale producers could also bolster the case for North American refiners. The U.S. refining sub-sector has been one of the most profitable sectors in the U.S. economy over the past five years.

A combination of diminished global output and rising global demand have helped reduce the global supply glut that dragged on oil prices for years. Production cuts from the Organization of Petroleum Exporting Countries and their allies have largely contributed to the cut in supply. Meanwhile, expanding economies around the world has bolstered demand for raw materials such as crude oil.

Valero (NYSE: VLO) “is well-positioned because its margins should stay strong and it should benefit from upcoming regulations that will make shippers use low-sulphur fuel and thus benefit higher-quality refiners,” reports Barron’s. “Gabelman thinks shares could rise to $112 from a recent $82.70.”

“Phillips 66 is a large integrated refiner that ‘looks the most discounted within the group,’ Gabelman writes. He thinks shares could rise to $118 from $85.46,” according to Barron’s.

For more information on the energy market, visit our energy category.