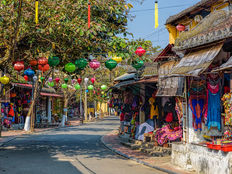 Vietnam: A Frontier Market on the Cusp?

Could Vietnam be the next exciting growth story to unfold in the frontier market space?

Recently, Vietnam has attracted global investor interest as a potential beneficiary of the ongoing trade war between the U.S. and China, but investors have also taken notice of the country’s attractive long-term fundamental characteristics. As the government seeks to boost foreign investment by relaxing foreign ownership limits on local companies, Vietnam’s status as a frontier market may change in the future. Additionally, Vietnam is leveraging its international trade relationships to maximize the benefits of an export-driven local economy, against the backdrop of a changing global economic landscape.

Making the Case for Investing in Vietnam

We believe the investment case for Vietnam is supported by several long-term dynamics. First, Vietnam’s growth rate has increased since the 2008 global financial crisis. For the last 10 years, Vietnam’s annual GDP growth rate has exceeded 6%, compared to an average of 5% for emerging market countries. In 2018, Vietnam’s GDP growth is estimated to have exceeded China’s by around 50 basis points (7.08% in Vietnam vs. 6.57% in China). Vietnam’s economic growth may be linked to the country’s abundant natural resources and a strong manufacturing base, which has led to a robust export-based economy that is also supported by healthy domestic demand.

In 2008, inflationary pressures led to a significant decrease in foreign direct investment. Since then, the government has been relatively successful in managing inflation despite a fast-growing economy and heavy foreign investment. In 2018, Vietnam’s annual inflation rate was estimated to be 3.5%, compared to an average 4.8% for emerging market countries.

Demographics are also helping to fuel long-term, sustained growth. Vietnam’s population is growing, has a median age of 31 years and is more educated than its neighbors in Southeast Asia. This young, educated population is contributing to a rising middle class, which we believe may drive higher rates of domestic consumption. While Vietnam is not currently in a full-blown transition to a consumption-driven economy like China, the same types of structural changes are taking place and driving the Vietnamese economy.

From Frontier to Emerging Market?

By most measures, Vietnam is a frontier market, characterized by a young population, high economic growth rates and a relatively undeveloped capital markets structure. Capital controls in the form of foreign ownership limits (FOL) are also a key feature for undeveloped markets, as the local government seeks to avoid excessive volatility in the form of massive foreign inflows and outflows, also known as hot money.

Vietnam’s government opened its economy to foreign investment in 1986, and maintains a level of control over how much foreigners can invest in local businesses. By enforcing FOL, the Vietnamese government effectively caps how much foreigners can invest in the local economy. However, these FOL have been loosened over the past few years with the aim of liberalizing both the capital markets structure and the economy. An amendment in the national securities laws that is currently under review may continue this trend, but companies in certain “sensitive industries” will retain a cap on foreign ownership.

Vietnam is taking gradual steps to liberalize its markets, while seeking to avoid the negative impacts of capital flight. Hot money is a real issue for frontier and emerging market economies, and the negative repercussions, including volatility, may have long lasting effects on the local economy. Index inclusion, if and when it comes, may probably occur at a measured pace, mirroring the approach that index providers are taking for onshore Chinese equities and bonds.

A Regional Powerhouse for Trade

As a traditional frontier market, Vietnam’s economy centers around exporting, primarily of natural resources and manufacturing goods. Escalating trade tensions between the U.S. and China has led to speculation that Vietnam could benefit, as companies may look to shift manufacturing operations from China to Vietnam to avoid tariffs and take advantage of the country’s lower costs. There is already some evidence that this is occurring. In 2018, the U.S. imported roughly $49 billion worth of goods from Vietnam, up 280% from only 10 years before. If the trend continues, and if foreign companies move their manufacturing operations to Vietnam, we believe those export figures may rise even higher.

Beyond the U.S.-China trade war, Vietnam has also been actively strengthening its trade relations with other global counterparties. While the U.S. backed out of the Trans-Pacific Partnership, Vietnam signed onto the revised agreement in 2018. This agreement with countries from around the world, from Asia to South America, sets a standard to treat all imported and domestically produced goods equally, essentially banning tariffs between members of the partnership. Because Vietnam is an export-led economy, these types of trade deals are crucial to maintaining a competitive edge for local Vietnamese firms that export their goods. More recently, the European Union signed a landmark free-trade deal with Vietnam, eliminating 99% of tariffs over the next 10 years. While the deal still needs to be approved by the European Parliament, it is another instance of Vietnam aggressively showcasing its economic strengths to the global marketplace.

We believe there is a risk that Vietnam’s exporting strength may have negative repercussions with regards to its trading relationship with the U.S. The trade deficit between the U.S. and Vietnam is heavily skewed in Vietnam’s favor, at $49 billion in exports and only $9.7 billion in imports. President Trump recently commented on the imbalance and some worry that the U.S. may start playing hardball, by applying tariffs on Vietnamese imports to the U.S.

How Vietnam Fits into a Global Portfolio

Investors in this frontier market are investing in an economy that in many ways mirrors where China was a few decades ago. In our view, attractive fundamentals and a focus on export-led growth may help propel Vietnam’s economy towards an exciting future. There are also risks to be weighed, such as the relatively undeveloped nature of the country’s infrastructure and capital markets, and the possibility of trade tensions with the U.S. going forward.

The MVIS Vietnam Index provides access to the largest, most liquid companies that are locally listed in Vietnam. The index also includes companies that generate over 50% of their revenues from Vietnam, including offshore names that have high exposure to the Vietnamese economy.