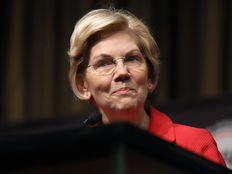 Sen. Elizabeth Warren (D-MA) is still one of the leading contenders for the 2020 Democratic presidential nomination, but her odds have recently dipped in some prediction markets, providing a boost to the iShares U.S. Healthcare Providers ETF (IHF B+) in the process.

IHF is a traditional index fund that targets U.S. equities in the healthcare providers sector. Specifically, the ETF provides exposure to U.S. companies from health insurance, diagnostics, and specialized treatment. The fund is up about 3% over the past month, a period that includes an impressive earnings report from UnitedHealth (UNH), IHF’s largest holding.

“Betting odds of the Massachusetts Democrat’s snagging her party’s presidential nomination have sagged to 39% from over 50% around Labor Day, according to Strategas Research’s Washington research team, led by Dan Clifton,” reports Randall Forsyth for Barron’s.

For long-term investors, IHF remains a quality because the long-term outlook for UnitedHealth, assuming Medicare For All doesn’t come into play, is bright.

“Cost advantages and network effects generated by the company’s size and scope underpin UnitedHealth’s wide moat and we think support its ability to serve clients at a lower overall cost than that of rivals,” according to a Morningstar note on UNH out earlier this month. “The result is enrollment growth and returns on capital that are nearly unachievable by competing firms.”

“In the betting markets, Warren had become the ‘consensus view’ among investors to win the Democratic nomination. Strategas’ D.C. team said that should be a signal to contrarian investors willing to go against the crowd, as apparently already happened with health-care stocks,” according to Barron’s.