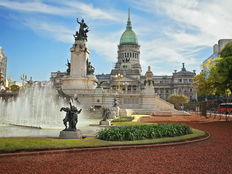 What to Expect From the Argentina ETF in 2020

Stocks in South America’s second-largest economy rallied in the fourth quarter, but couldn’t recoup all of the 2019 losses and the market is again being tested to start 2020, prompting market observers to speculate on what to expect from Argentine markets under the newly elected Alberto Fernández. There are concerns that Fernandez is cut of the same cloth as former President Cristina Fernández de Kirchner (CFK), but indications are to the contrary.

“Serving as President before Macri, CFK imposed tight capital controls and populist policies, including the imposition of capital controls, export control on agriculture, and the infamous nationalization of Argentina’s largest oil and gas company, YPF,” said Global X in a recent note.

One glimmer of hope for the Argentina ETF is its largest holding, online retailer and e-commerce giant MercadoLibre (MELI). ARGT, which tracks the MSCI All Argentina 25/50 Index, allocates 23.30% of its weight to MercadoLibre.

ARGT allocates about 44% of its total weight to consumer discretionary and financial services, underscoring a highly cyclical tilt, one that levers the fund to Argentina’s domestic economic policy.

Argentina has made a habit of having a boom/bust economies and that appears to again be the setup for 2020.

“Now Fernández steps into office to preside over an economy that is expected to contract for a third consecutive year,” according to Global X. “Immediately, his administration and the country’s central bank must stimulate growth and reverse the recession, which has led to persistently high unemployment, inflation that’s still above 50%, and a severely weakened peso.”

Fortunately, Argentina is forecast to notch positive economic growth next year, indicating there could be buying opportunities later this year with the fund.

“Some are already counting on it. The IMF projects that Argentina will return to positive 1.4% growth in 2021,” said Global X. “Likewise, they project that sovereign debt as a percentage of GDP will fall towards the end of 2020. And they expect that employment to improve over the coming years, projecting that it will fall below 10% by 2022. But many of these projections are ultimately dependent on a variety of factors, with the efficacy of Fernández’s economic policies at the top of the list.”