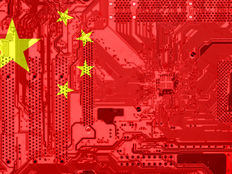 What’s Next for This China A-Shares ETF?

The Xtrackers Harvest CSI 300 China A-Shares ETF (ASHR C+), one of the premier US-listed exchange traded funds tracking China A-shares, is up 5.53% over the past month, indicating the fund is benefiting from cooling trade tensions between the U.S. and China.

Citi analysts also said that “we expect the current truce to last through the end of the year, with 2020 potentially being a ‘Deal-maker’ year.”

The two sides also agreed to make concessions to reflect their intent to move forward with trade talks. For example, Trump suggested he could reverse his decision to ban American companies from selling products to telecom giant Huawei.

“ASHR was one of the prime beneficiaries of the U.S.-China ‘tariff truce’ rally that gave stocks a shot in the arm on July 1,” according to Schaeffer’s Investment Research. “Shares of the exchange-traded fund (ETF) gapped higher and ended the session up nearly 3% — racking up their best daily gain since June 20, when ASHR vaulted to a gain of 3.3% on global optimism over a dovish U.S. Fed statement.”

“In the wake of those two big bull gaps over the last few weeks, ASHR is now positioned firmly above a trio of moving averages that have each played a significant role in the recent past,” said Schaeffer’s. “First, since its lofty two-month intraday highs of July 1, the ETF has pulled back to find emerging support at its 60-day moving average. Previously, this trendline — which roughly corresponds with about three months’ worth of trading activity — had served as a stiff layer of resistance for ASHR during the bulk of its 2018 decline, until it was finally surmounted in mid-January of this year.”

“Adding to potential support in the area, the 320-day moving average for ASHR is currently located right near a round 20% year-to-date return for the shares, and just below a 38.2% retracement of the ETF’s decline from its January 2018 closing high into its January 2019 closing low,” according to Schaeffer’s.

For more information on the Chinese markets, visit our China category.