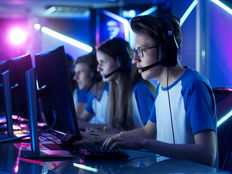 Why This Esports ETF Can Continue Climbing

The VanEck Video Gaming and Esports ETF (ESPO) launched last October, is proving to be a winner among thematic and even basic technology exchange traded funds this year, but ESPO’s 2019 success could prove durable as the global esports industry continues its exponential growth.

“Over the last two years, media coverage of esports, a form of competitive video gaming, has reached a fever pitch,” said VanEck in a recent note. “News of sold-out stadiums, multi-million dollar franchise fees for professional teams and big-brand sponsorship deals have driven the esports mania narrative. However, comparing esports revenues to the broader video game industry can help keep things in perspective.”

The esports theme is seen as a major disruptive force in the technology and sports arenas, indicating ESPO could be on the cusp of some impressive long-term growth.

ESPO components may include developing video games and related software, streaming services, and/or those involved in eSports events. To be included in the index, companies must generate at least 50% of their revenues from video gaming or eSports, which allows ESPO to have the highest concentration, among U.S.-listed ETFs, of pure play names participating in this fast-growing space.

An interesting trend and one that ESPO is levered to is video game publishers becoming operators of esports leagues.