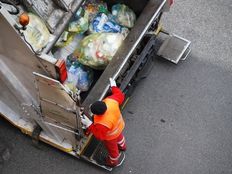 With This ETF, Trash Glitters

Garbage stocks are not necessarily garbage. Just look at the year-to-date performances of several of the major domestic waste haulers. Some of those names are among the largest holdings in the VanEck Vectors Environmental Services ETF (EVX C+), an exchange traded fund that is beating the S&P 500 by more than 600 basis points year-to-date.

EVX, which debuted in 2006, allocates roughly a third of its weight to Waste Connections (WCN), Waste Management (WM) and Republic Services (RSG), three trash haulers that are crushing broader markets this year.

“Publicly traded waste haulers have produced amazingly consistent stock returns. Stock in Waste Management is up 25% year to date, far better than the 6.4% gain of the Dow Jones Industrial Average. It has returned 23% a year, on average, over the past five years, better than the Dow’s 11% average over that span,” reports Al Root for Barron’s.

Earlier this year, Waste Management Inc (WM), one of the largest trash haulers in the U.S., said it is acquiring rival Advanced Disposal Services Inc (ADSW) for about $5 billion. That could spark a new round of industry consolidation.

Some analysts are awakening to the opportunities offered by waste haulers and their views are largely positive.

“Waste hauling is a good business, and Wall Street is taking note. On Monday, RBC Capital Markets analyst Derek Spronck upgraded shares of Waste Management from Sector Perform—his equivalent of a Hold rating—to Outperform. Spronck increased his price target from $113 to $125 a share, about 13% above recent levels,” according to Barron’s.

Adding to the case for some of EVX’s top components is that waste management companies are defensive investments with largely domestic focuses, traits prized by investors in the current market environment.

“Spronck isn’t the only analyst who thinks investors should add shares of Waste Management to their portfolios now. KeyBanc Capital Markets analyst Sean Eastman raised his price target on the stock from $112 to $120 a share on Monday,” according to Barron’s.

For more articles like this, visit our Tactical Allocation Channel.