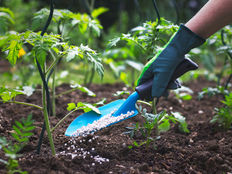 Agribusiness ETF May Get a Corn-Cobbed Boost

The VanEck Vectors/Agribusiness ETF (MOO A) is higher by more than 17% this year and could add to those gains into year-end thanks to strength in corn prices.

MOO seeks to replicate the price and yield performance of the MVIS® Global Agribusiness Index. 50% of the companies included in the index derive their revenues from agri-chemicals, animal health, and fertilizers, seeds and traits, from farm/irrigation equipment and farm machinery, aquaculture and fishing, livestock, cultivation and plantations and trading of agricultural products.

Fertilizer stocks are among the agribusiness names investors may want to consider and MOO features robust exposure to that segment. Some analysts are getting bullish on those names.

“After a year of markedly lower fertilizer prices, we believe fertilizer shares reflect particularly attractive buying opportunities given our expectation for a price inflection by Spring in all three major nutrients,” Byrne wrote. “Phosphate and potash inventories remain high, but strong demand in North America, Brazil, and India should facilitate quick drawdowns and increased purchasing.”

MOO debuted in August 2007, meaning it was able to participate in the latter stages of the commodity boom that lifted fertilizer stocks to stratospheric heights.

“Nitrogen, meanwhile, could benefit from a corn rebound. Corn production is expected to fall to 13.7 million bushels this year, down from 15.1 million bushels in 2016, as wet weather during the planting season caused farmers to plant less corn according to Barron’s. “But next year could be a different story, and companies that sell nitrogen and other fertilizers could benefit, Byrne argues.”