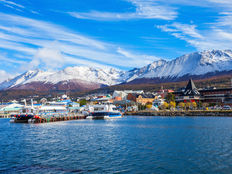 Argentina ETF May Find a Helping Hand from the IMF

Argentina ETFs have fallen on hard times, but the country may find a helping hand from the International Monetary Fund as the institution stated its intent to help the Latin emerging economy work through its current crisis.

On Thursday, IMF Managing Director Kristalina Georgieva revealed the Fund’s intentions to help support Argentina’s economy, but she added that they will wait to see the future policy framework adopted under the new leadership after the country holds an election later this month in which a change of government is widely predicted, Reuters reports.

“We are fully committed to work with Argentina and we are closely engaged,” Georgieva told reporters.

Georgieva, who took over as IMF chief last month, reaffirmed the IMF’s ties to Argentina remained “as strong” as it had been under her predecessor Christine Lagarde.

While IMF officials will meet with officials from Argentina during the IMF/World Bank annual meetings in Washington this week, sources familiar with the issue revealed no decision was expected on the next $5.4 billion batch of the IMF facility. The global lender will likely wait on the outcome of the Oct. 27 presidential election before taking action.

“We will be very interested to see what policy framework will be put in place, and when we know that, we can continue this conversation,” Georgieva added when answering questions about IMF’s credit facility.

Argentina is currently facing a debt crisis after a sharp market pullback in August pushed the country toward default. President Mauricio Macri was forced to delay payments on around $100 billion in debt.