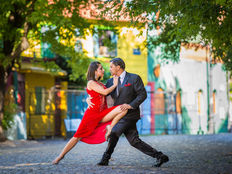 The Global X MSCI Argentina ETF (ARGT C+), the oldest and largest exchange traded fund dedicated to stocks in South America’s second-largest economy, is up nearly 19% this year. However, bullishness in Buenos Aires could be challenged by upcoming national elections.

AGT, which debuted more than eight years ago, follows the MSCI All Argentina 25/50 Index. Argentine stocks have been rallying this year due in large part to the upcoming inclusion in the MSCI Emerging Markets Index. Index provider MSCI announced last year it would promote Argentina to emerging markets status from the frontier markets classification.

“On 6 May 2019, embattled President Mauricio Macri sent a letter to all opposition parties to propose a national consensus plan to help to stabilize the economy regardless of who is elected president in the October 2019 general election,” said IHS Markit in a recent note. “Macri’s 10-point plan includes a balanced budget, an independent central bank, the honoring of sovereign debt, as well as changes to labor laws and the pension system.”

“Economic activity contracted in 2018 but there are signs that the recession has bottomed out, and a gradual recovery is expected to take hold in the coming quarters,” Lagarde said.

Last year, Argentina agreed to a $56.3 billion financing deal with the IMF when uncontrollable inflation caused its currency to lose half of its value against the U.S. dollar. The country’s leaders agreed to implement tighter monetary policies and austerity measures to control public sector debt and reduce the fiscal deficit.

“Over recent months, business confidence in Argentina has been undermined by economic recession, high inflation, and currency instability,” said Markit. “Opinion polls showing left-wing former president Cristina Fernandez de Kirchner (CFK) ahead of Macri for the first time have added to the negative sentiment. CFK is deeply feared by the private sector given her prior backing of capital controls and countenance of foreign sovereign debt default. However, opposition leaders have not heeded Macri’s call to negotiate a ‘basic consensus.’”

With Macri falling behind in the polls, investors should continue monitoring the reaction of Argentina’s markets to those headlines.

“Macri’s declining chances of re-election is undermining business confidence and therefore currency and credit volatility will remain until October,” according to Markit. “Indicators of change in political dynamics include whether the ruling coalition drop Macri and nominate instead Maria Eugenia Vidal, the popular governor of Buenos Aires province, as presidential candidate. There is still the slight possibility that CFK decides not to run for office; she has until 22 June to do so. Both developments would be risk positive as it would reduce the risk of Argentina abandoning the USD56 billion agreement signed with the IMF last year.”