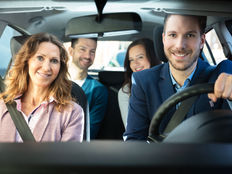 Looking back at 2019, it’s fair to say some of the year’s most ballyhooed initial public offerings, such as Lyft (LYFT) and Uber (UBER), disappointed investors. It’s also fair to say the *Renaissance IPO ETF (IPO C)* has been anything but disappointing as that ETF is higher by almost 34% as of Dec. 24.

IPO tracks the rules-based Renaissance IPO Index, which adds sizeable new companies on a fast entry basis and the rest upon scheduled quarterly reviews. Companies that have been public for two years are removed at the next quarterly review.

“Renaissance Capital’s IPO Index, a basket of newly public companies, is up 33% this year versus a 29% rise in S&P 500,” reports CNBC. “More than half of newly listed companies were trading above their issue price at the end of the year, compared with about 40% last year, according to Renaissance Capital, which provides institutional research and IPO ETFs.”

Riding Along With This IPO

Ridesharing IPOs like Lyft and Uber may have sputtered off the starting line, but some IPOs like Slack are getting rave reviews from market analysts keeping an eye out on the latest offerings from Silicon Valley. Investors who haven’t warmed up to allocating capital into the IPO space can dip their toes in the water with exchange-traded funds (ETFs).

“Health-care and technology companies were the best performers for the fifth year in a row. Karuna Therapeutics took the top spot with a roughly 380% gain year to date,” reports CNBC. “Smith pointed to the FDA approving new immunotherapy and cancer drugs ‘faster than investors thought.’ Medical device companies also performed well and were widely seen as M&A targets, according to Smith.”

As of Oct. 31, IPO had a healthcare weight of 10.5%, according to Renaissance Capital data.