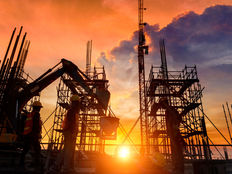 Be Defensive With This Infrastructure ETF

That doesn’t mean investors should ignore defensive assets such as infrastructure. Due to its domestic focus, the Global X U.S. Infrastructure Development ETF (PAVE) is a solid idea for investors to consider in 2020.

“A country’s infrastructure underpins its economic activity. It enables businesses and individuals to operate in a more efficient manner while directly impacting employment and economic output,” said Global X in a research note. “Beyond providing the essential foundation for economic activity, new infrastructure is vital for enabling technological developments like autonomous vehicles and 5G networks and can be a medium to address climate risk and public health challenges.”

PAVE focuses largely on domestic infrastructure, as companies must be listed in and derive more than 50% of their revenue from the US. The fund may include large-, mid-, and small-cap companies.

“According to research from S&P, a 1% increase in US infrastructure spending as a percentage of GDP translates to a 1.7% increase in GDP over the next three years, or a 70% return on investment,” according to Global X. “This is backed by the effect of the short-term fiscal multiplier, which, similar to other government spending, boosts aggregate demand in the economy.”

“Infrastructure spending also has a long-term impact on the economy as productivity is expected to increase given the ties of infrastructure with economic efficiency,” according to Global X. “The relationship between infrastructure and productivity can be analyzed from supply side economics. For example, improved transportation alternatives such as new highways and new transportations systems could facilitate the access and distribution of products to companies. In the same vein, companies could gain access to more skilled labor and vice versa, promoting higher labor productivity.”