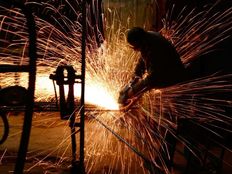 Be Sure To Bet on This Industry ETF in December

Investors looking for winning sector and industry ETFs this month may be inclined to lean toward retail fare because we’re in the midst of the holiday shopping season, but historical data suggest some other industries deliver better December returns.

The Invesco Dynamic Media ETF (PBS B+) is one of the prime industry ETFs to consider this month and historical data confirm as much.

PBS seeks to track the investment results of the Dynamic Media IntellidexSM Index. The underlying intellidex was composed of common stocks of 3 U.S. media companies. These are companies that are principally engaged in the development, production, sale and distribution of goods or services used in the media industry.

“Retail has been the main focus of Wall Street ahead of the holiday season, but it turns out the retail sector has not been a top performer in December during the past 10 years. Instead, the media sector, represented by the PowerShares Dynamic Media Portfolio ETF (PBS) has done well in the month,” according to Schaeffer’s Investment Research.

“PBS has closed the month (December) in positive territory 70% of the time in the past 10 years, with an average return of 1.6%,” notes Schaeffer’s.