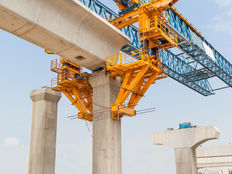 Big Demand is a Big Deal for Infrastructure ETF ‘PAVE’

The Global X U.S. Infrastructure Development ETF (PAVE) is up 18.65% this year, making the fund one of the leaders among infrastructure ETFs. While PAVE is impressing in 2019, what is more important is the ETF’s long-term potential.

Recent infrastructure investment in the U.S. has been on the rising, boding well for investments such as the $129.6 million PAVE.

“Importantly, private sector infrastructure financing, as well as leadership from states and local municipalities, have contributed significantly to recent investment,” according to Global X research. “Political gridlock at the federal level should still, however, be evaluated as a short-term obstacle given that widespread support for infrastructure exists across the political spectrum.”

PAVE, which recently turned two years old, holds 93 stocks and over 93% of those holdings hail from the industrial and materials sectors. Infrastructure needs remain dire and obvious, but this is one issue the split Congress could come together on.

“The current administration and nearly all 2020 presidential candidates appear supportive of a major US infrastructure package,” said Global X. “Business interest in infrastructure investment is similarly high given its potential to boost economic productivity and growth. Indeed, despite partisan bickering, the 2020 federal budget is expected to include at least $200 billion for infrastructure, as an early stage bid for the long-dreamed of trillion-dollar deal.”

While he was campaigning, President Donald Trump’s pledge to spend $1 trillion shoring up U.S. infrastructure needs was seen as a potential catalyst for the related exchange traded funds. Still, it could take some time for infrastructure ETFs to see the full benefit of Trump’s still nascent infrastructure plans. Fortunately for PAVE, infrastructure demand exists without political wranglings.