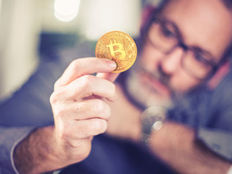 Bitcoin Rally Could Benefit Members of Some Chip ETFs

After being drubbed in May, semiconductor stocks and the related exchange traded funds, including the VanEck Vectors Semiconductor ETF (SMH A-), could use some relief this month. That relief could materialize if bitcoin continues surging.

U.S. semiconductors were among the hardest hit in the wake of the Huawei blacklisting as chipmakers lost a big customer in Huawei, the world’s largest provider of telecommunication equipment, which purchased about $20 billion in semiconductor chips each year.

Bitcoin, the largest digital currency by market value, surged more than 60% last month. An ongoing rally for cryptocurrencies could spark upside for some semiconductor makers, including some SMH member companies.

Semiconductors have exhibited high sensitivity to the trade war because China is a strong driver for the chip-making sector, which includes several fast areas of growth including gaming and artificial intelligence. If the trade war is renewed, the barriers will raise costs for many of these multi-national companies.

One SMH component getting a lift from resurgent bitcoin prices is Advanced Micro Devices (AMD), which garners a weight of 4.56% in the fund.

“We’ve had a very strong rally in bitcoin. Bitcoin was a big driver of the semi rally when it rallied the first time, so if we get bitcoin over $10,000, we can get it back to that mania of mining again, and that should be an additional tailwind for AMD. So I think AMD is very well positioned,” Boris Schlossberg, managing director of FX strategy at BK Asset Management, said in an interview with CNBC.

Bitcoin is coming off its best monthly showing since 2017. Bitcoin’s recent resurgence has renewed some traders’ animal spirits toward the once-beloved and controversial digital asset. Bitcoin’s rally comes as more than two-thirds of high-net-worth individuals will be invested in cryptocurrencies in the next three years, reveals a new global poll.

“AMD’s graphics chips have the capacity to power bitcoin mining, which requires fast processors, so as bitcoin demand grows, the need for AMD chips also climbs. The cryptocurrency has rallied 126% in the past three months, to above $8,000, a gain of more than $4,000,” according to CNBC.

Nvidia Corp. (NVDA), which commands over 5% of SMH’s weight, has previously displayed some correlation to bitcoin, but that stock tumbled almost 25% last month.

For more information on the tech sector, visit our Thematic Investing Channel.