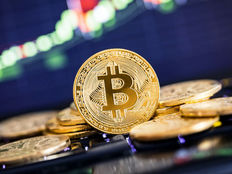 Bitcoin Tumbles In The Middle Of Regulatory Issues

Bitcoin tumbled last week as members of Congress strove to underscore the downsides of the cryptocurrency on Capitol Hill.

The drop also occurred as Facebook (FB) CEO Mark Zuckerberg presented plans to the House Financial Services Committee regarding a new cryptocurrency, Libra. Lawmakers have lambasted the project and criticized cryptocurrencies as having money laundering and terrorism potential.

“Cryptocurrency either doesn’t work in which case investors lose a lot of money — or it does achieve its objectives, and displaces the U.S. dollar as the sole reserve currency in the world,” Rep. Sherman said during the hearing. “You’re going to be making powerful burglary tools and letting your business partners commit the burglary.”

Analysts have been skeptical of Bitcoin’s long-term viability due to regulatory issues for some time now.

While the ETF market has been anxiously awaiting a Bitcoin ETF, the SEC recently rejected Bitwise’s ETF proposal. Now crypto investors are wondering what this means for the future of potential crypto ETFs and the market as a whole.

Legal pundits said the decision could indicate that a bitcoin ETF may still be years away. But Matt Hougan, Bitwise’s global head of research, sees positives in the decision. The SEC has demonstrated that it’s willing to at least raise addressable concerns, rather than rejecting a product out-of-hand with little explanation.

“Today’s selloff is a continuation of the themes that have been plaguing crypto for the past few months — increased regulatory scrutiny,” said Jeff Dorman, chief investment officer or Arca. Dorman said a “lack of positive catalysts” coupled with low trading volumes have exacerbated the moves lower.

Still, there are some who see the cryptocurrency as a diversification tool and in some cases a safe haven amid times of economic and political turmoil.